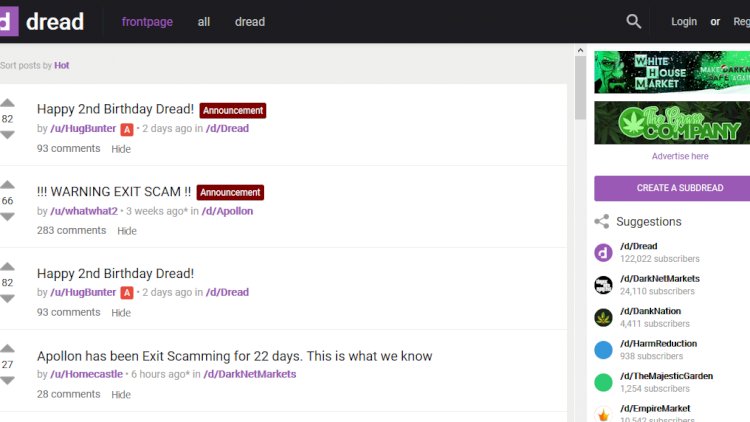 Dread celebrated its second birthday on February 15 according to a post on the forum by HugBunter on February 16, 2018.
In a PGP signed message, Hugbunter apologises to the community for the late notifications on goes ahead to thanks the users for the making the forum what it is today.

In the post, HugBunter acknowledges that it has indeed been a bumpy ride since the journey began. Despite all, they have a lot of plans as they continue offering a platform where privacy and anonymity is respected.

The Start of Dread

HugBunter says that the initial plan was to create a security forum, extremely niche with a capacity of about 1000 users. By then the number seemed to be too ambitious. The idea to develop Dread, a Reddit style forum came after popular social media platform Reddit banned dark web-related subreddits.

Back then, Hugbunter was one of the most popular users on Reddit who discussed darknet topics. So the move prompted him to think of a way to enable community users to continue sharing and exchanging ideas since he saw that there were much more to come.

For the time Dread has been operating, HugBunter mentions that there have been various challenges, and one of them is all manners of FUD which have greatly affected the thousands of users who benefit from the forum.

One of them is when one user from Gangsta's paradise started a smear campaign to spam Dread for a year. This, however, came to an end with the decision by the founder to lock him out. The perpetrator then stopped and opened a news site called DarkNetStats which Hugbunter describes as a fake darknet news site.

Another major challenge are the DDoS attacks according to the post. So far, Hugbunter claims that it is the most prolific issue affecting Dread since it causes downtime that lasts for days and at times, even weeks. This has, however, been mitigated thank to the decisions by the staff.

The post ends when HugBunter shares the forum stats, and they are as follows.
User accounts: 121,194

Before the end of the PGP signed message, Hugbunter says there will be an amazing announcement coming shortly. As of now, we cannot speculate what it and all we can do is just wait and see.

Tap here here to join the discussion on Tape forum